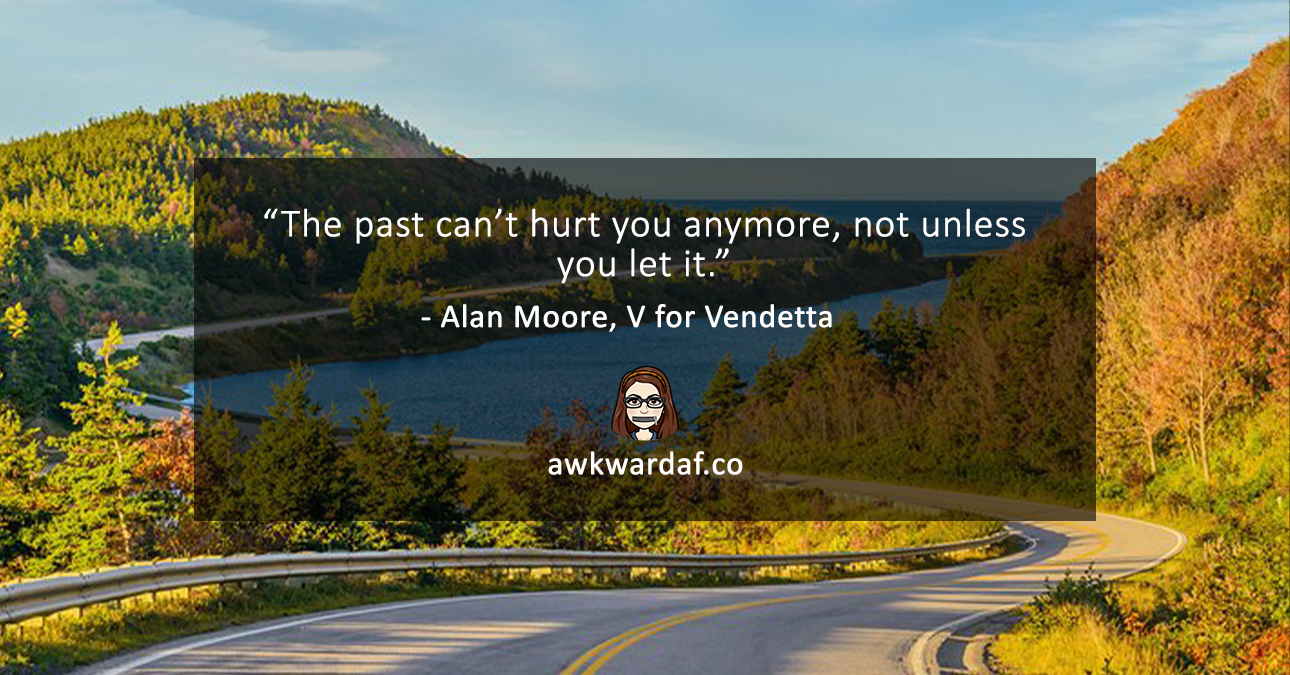 Do you ever lie awake at night, recalling awkward or detrimental memories? Mistakes in the past that (both major and minor) that still haunt you today? Maybe you accidentally called someone the wrong name, sent a text to the wrong person, got fired from a job, or even something so severe that I’m not going to list in this blog post. Whatever it is, does it feel like you can’t stop recalling these events even though you try? It’s like an annoying song on repeat. If you don’t experience this madness, I’d like some of whatever you are having. You should be the one writing the blogs.

I’ve made A LOT of mistakes during my 27 years on this earth, and as these memories are hard to erase, I might as well use them to my advantage. What lessons did I learn? Who is ready for storytime?!

Story #1 – STAY TF AWAY FROM ABSINTHE

Recently, I recalled a Saturday night during college where some friends and I had the brilliant idea of splitting a bottle of absinthe. We felt so badass and referred to that night as “absinthe night.” Yes, that night deserves a name.

If you are familiar with absinthe, you’ll know there are many recommended ways of “enjoying” this black licorice-flavored potion of death, and that drinking it straight out of a shot glass is not one of them. But that’s what we did, and boy was it messy. We calculated that the bottle would allow us to each have 3 shots. As a college student, 3 shots sounded pretty manageable. However, due to the much higher alcohol content of absinthe (and the fact I was chasing it down with “jungle juice,” whatever the hell was in that…) I don’t even recall taking my third shot. I probably did, but wow that night is a blur. It was one of those nights where we planned to go to one of the fraternity houses, but none of us made it outside of the dorm. Now, the morning after, I fully remember and I am going to spare you those details. Years later, I look back at the memory and I don’t quite understand my earlier decision-making skills. Clearly, my frontal lobe was not fully developed. So many things could have gone wrong, and the end result of this “fun” was quite negative. Now, I’m comfortable sharing this memory as many of you reading this, probably have similar stories where you drank too much, made a fool of yourself, and got sick. This is water under the bridge. But, I still remember it (…or at least the before and after).

This may sound crazy, but I still beat myself up over a mistake I made during my first job out of school. I was sending a newsletter via email to tens of thousands of recipients. At the top of the newsletter, I misspelled the word “February.” WTF Alex…were you in kindergarten? Had I just read over the full newsletter a few more times, I might have caught the mistake. That was not a good day, and I think about it every time I send a mass email.

Finally, I recall a time when I was about 8 or 9 years old, vacationing with my family in Nova Scotia. I told my parents I was going to one of the kid-friendly activities the resort was holding, but instead, I befriended another little girl and went off somewhere else with her. My parents looked for me at the event, and when they couldn’t find me, they called the Royal Canadian Mounted Police, and the search started. Mind you, this happened around the same time as the Elizabeth Smart kidnapping in Salt Lake City, so I could only imagine what was going through my parents’ minds. Luckily, my parents only had to go through this nightmare for a few hours as I returned to the cabin later that evening. Holy hell, do I feel terrible about the decision to not inform my parents of my plans. This happened almost two decades ago, and I STILL THINK ABOUT IT TODAY. Sorry, mom and dad…

I wish this was the end of my list of mistakes that pop-up in my mind like commercial breaks during your favorite show, but I have plenty more where that came from. Memories like these are shadows that creep in and put a damper on my day (and night). But maybe they don’t have to. These shadows also make interesting stories and inspire me to write.

While these pictures show my shadow, they do not show the strong person standing in the light. To me, the shadow signifies the past. The sunshine represents hope for the future. And lastly, there’s me, living in the present acknowledging both the shadows and the light. Using them to make wiser decisions (and forgiving myself for mistakes) as I continue my journey along my scenic route.

(Sorry if that last line made anyone want to throw up — I call this blog Awkward AF for a reason).

2 thoughts on “Re-living Those Awkward Mistakes”