I hope you all are keeping some sort of journal because 2020 is going to take up a lot of space in future history textbooks (if textbooks are even a thing in the future). Seriously, they are going to make movies about this shit show of a year. I’m thinking maybe a romantic tearjerker about two young adults matching on tinder, but they can’t meet up at the bar because the bars are closed due to a stay-at-home order. Or maybe a comedy about people who accidentally left their webcam on during a conference call and did not dress for the occasion. A few months back, a friend told me a horror story about a woman who accidentally left her webcam on while going to the bathroom. Note to self: don’t do that…ever. Alright, this is a terrible time for potty humor. I’m cracking awkward jokes now because the real issues are uncomfortable as hell. These issues are realities about society and ourselves that most of us fail to face. In addition to the lighthearted movies, there’s going to be a lot of sobering content regarding the countless murders caused by racism. Hopefully, future generations will look at us fools and think wtf?! Just like our generation (or at least many of us) look back on U.S slavery and the Holocaust.

I HATE watching the news. While I know it is crucial to stay up-to-date on current events, every time I hear Donald Trump talk, I turn the TV off. He never says anything valuable. It’s always name-calling and degrading others. The other day, I forced myself to listen to his spiel about the riots that went on this week in response to the horrific murder of George Floyd and many others before him. He kept calling the people who were rioting “thugs” and “anarchists” while failing to address the reason why these people are rioting. Trump is a classic narcissist. It’s all about him, and how events impact him. What is the main quality he lacks? Empathy.

Empathy is “the psychological identification with or vicarious experiencing of the feelings, thoughts, or attitudes of another” (dictionary.com). As our president, Donald Trump has a certain amount of influence over his supporters and our culture. And right now, he is failing to advocate against the critical racial issues our country currently faces. He clearly does not care about these issues as he’s never personally experienced racism, and he never will. Consequently, a culture that lacks empathy may very well fire up a civil war.

Empathy is one of my favorite topics to blog about, as I genuinely believe it can solve many social issues, including racism. Many people struggle with empathy, so this solution is not a quick fix.

One strategy we currently use to combat racism is education. We learn about the oppressive societal structures, so we can break them. Yet, do we actually break them? While knowledge is helpful in understanding that racism exists, does it sufficiently motivate us to fight it? The answer is no. Education isn’t necessarily a motivator. That’s empathy’s job. Truthfully, we need both education and empathy if we want to win this battle.
Step 1) Education leads to an understanding of racism.
Step 2) Empathy ignites our fire to take action against racism.

Due to our level of privilege in society, as white people, we need to challenge ourselves to walk a mile in a black person’s shoes. The figure below is from the PNAS research article, Risk of being killed by police use of force in the United States by age, race–ethnicity, and sex. 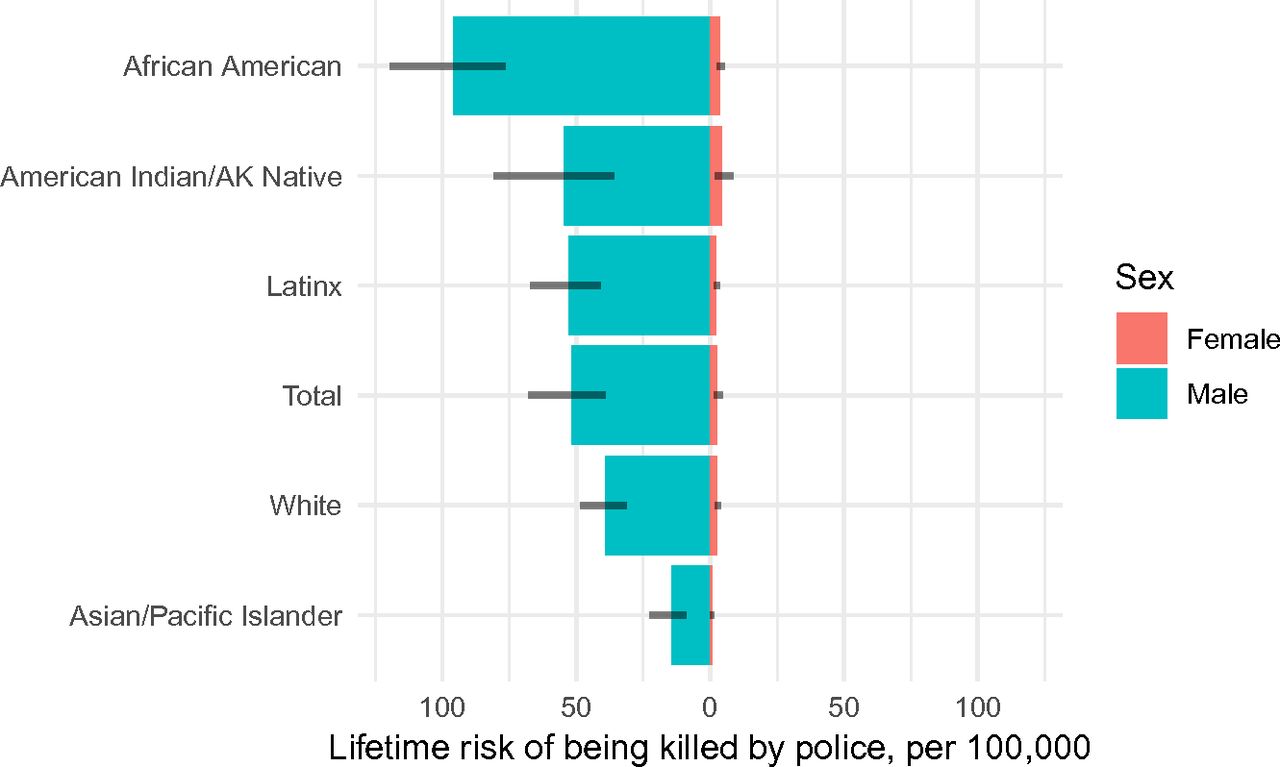 That said, if we challenge ourselves to walk a mile in a black person’s shoes, we might get a glimpse of the hardships they may experience, such as worrying about police brutality, putting up with microaggressions, stereotypes, and much more. That glimpse might inspire us to do something beyond our own personal interests, and take action against racism. In other words, empathy can push us to strive for something greater than ourselves.

Here are some examples of how to be empathetic towards the black community during this time:

1. Be sensitive when discussing the riots.

I see many white people posting on social media about how they think all of the destruction and rioting is immoral while failing to acknowledge the issue that triggered this kind of reaction in the first place. I don’t want to diminish anyone’s concerns, especially during a pandemic. I realize protests are definitely a large gathering, and I share those same concerns about spreading COVID-19. With this in mind, an alternative way of thinking is accepting that both racism AND rioting are harmful. One is an ongoing problem, and the other is a response to the issue. An empathetic person may understand that the riots and destruction are all negative while recognizing that this more combative approach is a response to not only one murder, but a long history of murders, violence, and injustice. The black community and allies are angry, and much of our country is not listening. These privileged citizens are solely thinking about themselves and how the rioting impacts them. Which leads me to my next point…

2. For those who are privileged, try not to make this all about you.

Like I mentioned earlier, this is a great time to write all of your thoughts and observations in a journal. That said, when you are sharing your thoughts either in conversation or on social media, try to limit discussing how everything is impacting you. You are going to embarrass yourself because the weight you are carrying is a mere fraction of the weight on the black community’s shoulders. Don’t flatter yourself.

Sometimes it is much better to listen, read, watch, and understand.

4. Let the black community lead the way, and stand by them.

Acknowledge your white privilege and the idea that we really only have our own best interests at heart. The black community knows the best route to take, so hand over the torch and let them navigate.

On November 8, 2016, the day that Trump won the election, I, like many others, experienced a major revelation; our country very much divided. Some might say we are divided due to conditions such as our two-party system, economic status, or race. While I agree that these conditions are divisive, I also think we are divided by our ability to empathize.

Let’s end this shit show once and for all, not for ourselves, but for the families of the fallen, and the black community as a whole.